What is Driving the Republican Position on the Budget Battles?

What exactly, for Republicans, is the budget debate about? It is not primarily about the public debt; it is not even about economic growth.

The last two Democratic presidents, Carter, and Clinton both reduced the size of the public debt as a percentage of our GDP. On the other hand, Richard Nixon was the last fiscally conservative Republican. Every Republican president since has contributed to the rise of the public debt's share of GDP. Indeed, between Reagan and the first Bush, the gross public debt in nominal terms increased fourfold. (Data from CBO.) 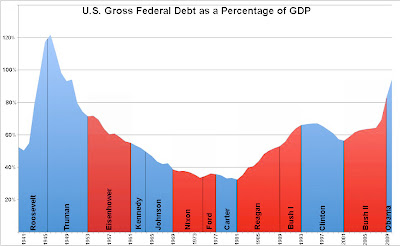 Closer to our time, the combined 2 trillion dollar swing between the last year of budget surplus enjoyed during the Clinton administration and the budget deficits of Obama was principally the doing of the Republican president between the two. According to the New York Times' analysis of CBO data, the business cycle (or recession) accounted for 37 percent of this 2 trillion. About 33 percent came from Bush's tax cuts, wars, and prescription drug benefit bill. Obama's main contribution of 20 percent came from his continuation of the Bush tax cuts and wars. His own policies, namely, the bailouts and health-care reform contributed just 3 percent. If Democrats are the party of tax-and-spend, Republicans are the party of cut-taxes-and-spend, and the latter are the reason why the public debt has risen to an unsustainable level.


There are three solutions to reducing the debt. One is to only raise taxes, one is to only cut spending, and one is to do both. And it is a reflection of the rightward political equilibrium of our times that the Republican party is insisting on its predictably single-pronged strategy of just cutting spending, whereas the Democratic party is at least making a perfunctory effort to do both. Republicans justify their call to cut government spending to encourage economic growth. However, if we accept the popular (but mistaken) view that the Carter years were the recent nadir of US economic performance, it is still worth observing that every Republican president since Herbert Hoover, with the single exception of Ronald Reagan, experienced lower annualized GDP growth during their administrations compared to Carter. Clinton, as most would remember, actually enjoyed high growth rates than did even Reagan. (Data from BEA.) 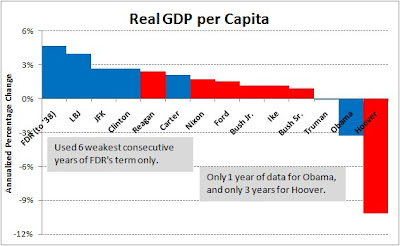 Put yet another way, the ratio of the public debt as a percentage of GDP has decreased for every Democratic president since Franklin Roosevelt, and it has increased for every Republican president except for Eisenhower and Richard Nixon's first term.


What do these details tell us? It's not primarily about the debt, and its not primarily about growth for most in the Republican party now, except perhaps those among the Gang of Six. There are lots of avenues to cut spending and at least a whole other way, raising taxes, to reduce the public debt.  Instead, it is no wonder that on the Budget Committee Republicans' webpage about "Today's Major Domestic Challenges," over half the words deployed focussed on Social Security and healthcare, while the word "debt" appears only once. What Republicans want today, even more than reducing the debt, is to shrink the size of the federal government, and in particular Social Security, Medicare, Medicaid, and "Obamacare." In the end, Republicans care most about the liberty and virtue of individuals, and less about the goals of collectivities -- whether these be the healthcare of the indigent, the social security of the old, or the economic growth of the nation as an aggregated abstract. And that is why the public "debt" is ultimately only the political lever conveniently at hand for an ideological end born out of their first principle -- not necessarily misguided I should add -- that liberty from government should always come first.
Posted by Elvin Lim at 9:18 PM